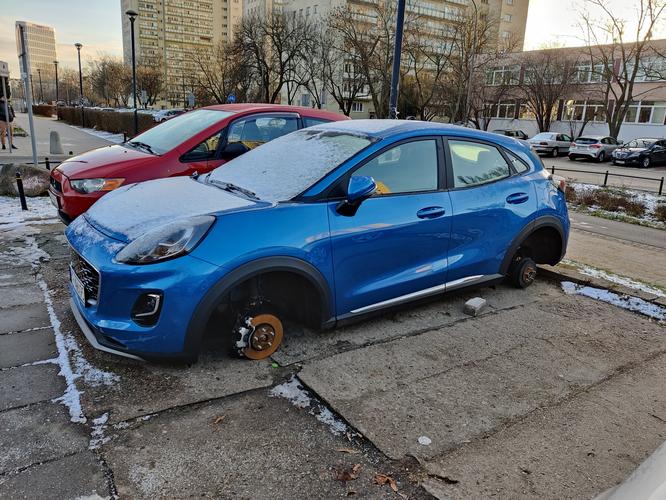 The number of thefts higher by 59 percent.

In one year, the number of crimes regarding the theft of accessories and car parts soared from 3295 to 5463, which means an increase of 65 percent.Only in one year!These data are divided into burglary and theft of someone else's property.In 2020.The former were 866, while the second 2429, in turn a year later, as long as the theft was slightly less, because 844, as many as 4619 cases of theft of someone else's property were registered.

It is now possible to explain here what burglary means.This is a crime of theft of someone else's thing, but after breaking the security in order to get to it.This means that in the case of a car, the thief had to break the lock or knock out the glass to get to the car, and then take the thing out of its interior.This means that theft with burglary may be theft of radio, but not theft of wheels or catalyst from the car on the street.

Of course, there are only wheels and catalysts in the statistics about theft.You can hear more about catalysts, you can even say that this is already a scourge, while the theft of wheels can be seen every day.I met three cars on bricks for one month.

Is this the effect of higher and higher prices?

Most probably know from stories, statistics or remember that this type of theft was a lot in the 90s.When, because of poverty, some did everything they could to earn a bit, in this committing theft.There were even situations that the victims of this type of crime later bought parts on the stock exchanges that they had previously stolen.

Of course, the scale of the practice is much smaller than it used to.The reason for this may be the increase in inflation and the increase in prices in stores.Car parts and services on websites also went down, and the market is struggling with the effects of Pandemia.

The rest of the text under the video material:

The wheels are one of the basic elements of the car beautifying, which is why many people on alloy wheels are able to spend several thousand zlotys.The thief can be enriched with a large amount in 20 minutes."Better", when there are expensive tires on the rims, then the earnings are much greater.Neither tires nor rims can also be associated with a specific car.

In the case of the theft of catalysts, precious metals and other elements that are inside these devices are valuable.A catalytic reactor can cost from several hundred to several thousand zlotys.What's more, the catalyst can often be worth more than the rest of the car in which it is installed.In addition, they are already mounted in virtually every car, so the potential "victims" of theft are on every corner.

The car owner is practically defenseless

The worst thing is that the owner of the car has almost no way to defend against this practice.In the case of wheels, you can try to protect yourself with special screws popularly called "thieves", but the thieves have long been equipped with special attachments that take off and such protection.It is also in vain to look for protection in monitoring, because the thieves are so clever that they are able to steal under the guidance of cameras, but so that they are not targeted.

Parking in guarded places is an effective way, but to defend yourself against thieves, the car would really have to stand there without interruption.Modern anti -theft systems can also come to help, which are equipped with sensors monitoring the location of the car.The system of this type can alert the owner on the phone when it registers the traffic of the vehicle.Unfortunately, thieves usually work at night when the owner is sleeping, so such an alarm can be missed.

The police can not do much

Policemen also spread their hands.Unfortunately, without any characteristics of a thief, even monitoring will not help, and officers can only do ambush on them and catch in the act.Otherwise, you can be almost certain that after some time we will get a letter about the discontinuation of the investigation due to the failure to.