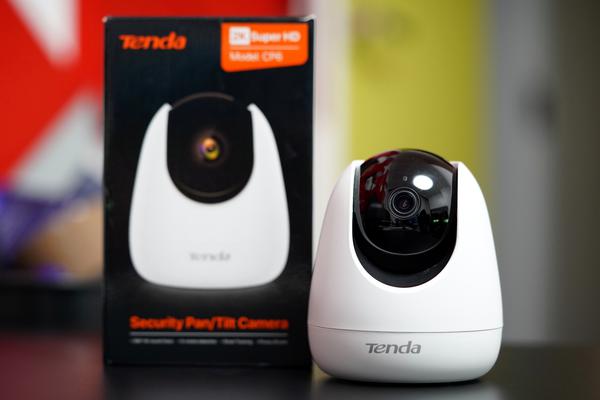 The prices of home surveillance cameras start from about PLN 100 - sometimes they do not even exceed this magical limit. The Tenda CP6, the model I will take to the workshop today, costs a little more, about PLN 140 (and sometimes it is in promotions for PLN 120). Still, it offers 2K image capture, rotatable design, two-way communication and much more. Let's see if it is really as interesting as it looks on paper.

In terms of design, the Tenda CP6 is a typical representative of home surveillance cameras - it actually looks like most of this type of equipment. You can judge for yourself whether it is bad or good. However, do not be fooled by the common appearance - this one hides several curiosities and possibilities.

Turning the camera over, we see another advantage - the LAN port, the presence of which will be appreciated primarily by users without WiFi access or having problems with wireless Internet, which, for example, often disconnects, interrupts, etc. A wired cable connection is always more stable and the Tenda CP6 makes it possible.

Right next to the RJ45 there is a charging socket (the cable included in the sales kit is long - 3 meters - so there shouldn't be a problem with the arrangement of the camera in the selected room). On the other hand, there is also a loudspeaker above the connectors, because the device offers two-way communication - which can be useful in many usage scenarios (caring for a child or an elderly person, saying a few words to a courier or an employee, etc.).