Elements of anti -burglary home securityWe are building a house 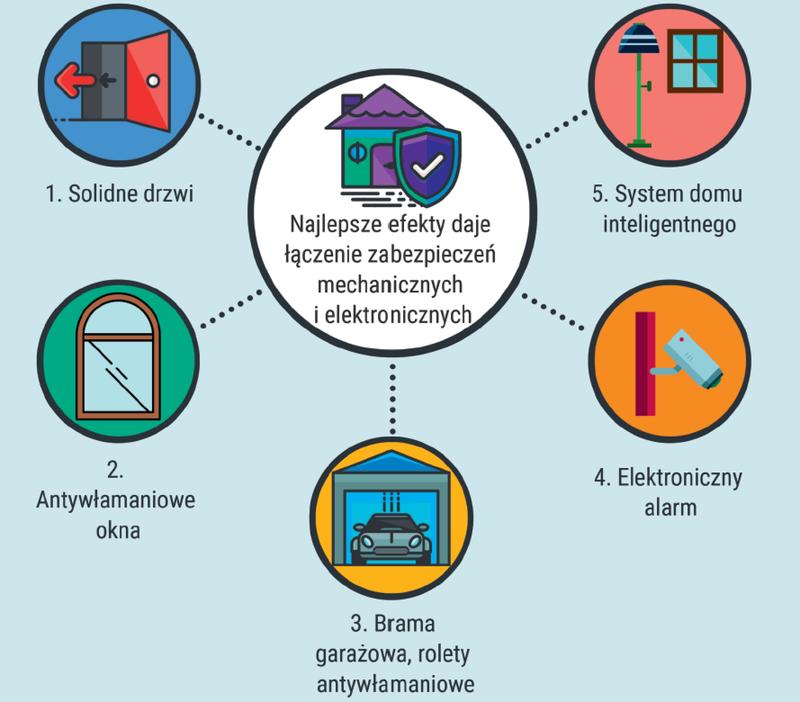 Elements of anti -burglary home securityWe are building a house

The investor should be aware that he has no security that cannot be pushed.A well -prepared and experienced thief will overcome every mechanical barrier - he will cut the bars, challenge the window, diverting the castle.It's just a matter of time.Time is taken away from a vigilant neighbor or electronics - a siren alarming everyone around or a patrol sent from the security agency after a signal from the alarm headquarters.So -called.A random thief usually gives up burglary if he fails to go inside for a few minutes.

Construction joinery (doors, windows, gates, blinds) can have different burglary resistance classes.Products that the seller describes as anti -burglary should have a burglary resistance class and certificate confirming this fact.The Polish standard distinguishes 6 such classes, from RC1 to RC6.The higher, the more time the criminal needs an obstacle.Crade compartments can be overcome by a random thief, without the use of tools (kick, shoulder blow, etc..).

Classes 2 and 3 will stop him for 3 to 5 minutes, provided that it is equipped only with simple tools: screwdriver, hammer...At the higher, the burglar must have experience and tools (crowbar, ax, drill).The product in class 5 will detain a criminal armed with a grinder or jigsaw for a quarter of an hour, in class 6 to 20 minutes.It is worth noting that in single -family houses, no -class products are mounted than RC3.And emphasize how important for the effectiveness of anti -burglary joinery it is its proper assembly.

Anti -burglary doors are usually a galvanized steel frame, reinforced with hardened bars and covered with sheet metal (usually hidden under a nice veneer).The wing has anti -tighting pins, blocking after closing in the holes in the frame, also steel and solidly anchored in the wall.They are generally equipped with two locks with several/several locking points.

The burglary resistance class should be determined in relation to the entire door, not only their components (e.g..lock).A solid door is usually the first dam that investors think about.Although as a key element of the safety system they will only work in a block of flats, and on a higher floor.In a free -standing house, the thief will simply look for a less protected point.Therefore, the door for the terrace and windows should also resist him.The entire security system is as effective as its weakest link.

As we have already mentioned, the anti -burglary windows (contrary to the name and hopes of buyers) will not stop the criminals (like any other security).But they will make it difficult for him to enter the house.Their resistance depends on the profile (i.e. the frame), fittings, glazing, additional protection.Anti -burglary glazing is laminated with a special foil that prevents them from breaking, e.g..The P4 glass is two glass panes between which four layers of foil are placed.

Such glazing, even broken, will not fall out of the frame.The wing is undermined by the fittings - standard peripherals ensure tightness, but for the criminal they are not a big challenge.That is why mushroom bolts and anti -tighting hooks are worn in the anti -burglary windows.Another protection can be a handle with a key, equipped with a hindering rose.Some manufacturers still use hardened steel hook bolt.

Depending on their availability, you can also think about protecting roof windows - like facade, equip them with an anti -burglar glass and a key handle. 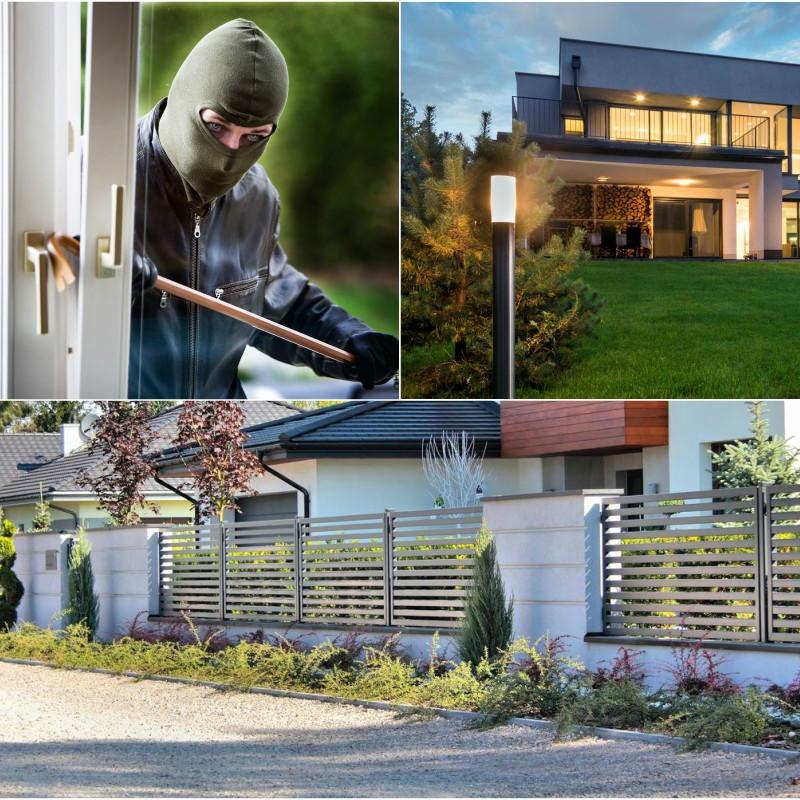 Entrance through a garage is a temptation for a thief.You can steal a car, usually you can also easily go from the garage home.That is why the gate should be armed with anti -burglary security, and in addition - between the garage and the residential part - insert the anti -burglary door.The gates secure reinforced profiles and handles with a bolt and a drive that resists undergoing undermining.Rolled models have locks mounted on a winding shaft.

Zewnętrzne rolety antywłamaniowe buduje się z profili ze stali lub wzmocnionego aluminium (tworzą pancerz, zwany płaszczem), dodaje zamek i maskownice, uniemożliwiające odkręcenie prowadnic.Such blinds are heavy, which is why they are usually driven by an electric motor.They protect not only against robbers - also against noise and extreme temperature.However, they are effective only when they are abandoned, which in turn can be a signal that nobody is at home.

Windows mogą zabezpieczać też tradycyjne okiennice.They are prettier than roller blinds, and equipped with anti -burglary or bolted fittings from the inside will make the work of burglars hinder the work.It is important that the robber cannot unscrew the hinges.

This is in a sense the first line of defense.Of course, he will not stop a determined thief, but he can make it difficult or make it easier for him.Depending on the investor's preferences and the provisions of the local spatial development plan, it may be openwork or full.The full, like a compact line of conifers, provides privacy in the garden, but at the same time protects the criminal from the eyes of the neighbors.The fence should be built so that it is difficult to climb it, not like a ladder.Hinges of a wicket, or gate, it is good to secure in a way that prevents you from removing the wing.

Without formalities, fences up to 2.20 m high, both from the neighbor's side and the street (unless the local spatial development have been otherwise).Higher require notification.Amateurs of traditional protection methods (barbed wire, mashed glass) should know that the pointed elements, dangerous for people and animals, can be placed at a height of over 1.80 m.

Once wickets were planned so that it was visible from the kitchen who was standing in front of the fence.Today, watching who has just pressed the bell allows the video intercom.The devices appear as wired (requiring the cable to be routed between the building and the gate) and wireless (the signal is sent by radio).Some have the function of recording the image and sound (it starts after pressing the bell button or after detecting the movement in front of the entrance).

There are also models that can redirect the conversation from the interlocutor (camera at the gate) to a mobile phone.This is a convenient solution because you can talk to the courier that calls the goal when we are at work.A thief who observes the property for a long time, the video intercom will not scare away, but if he has been equipped with the image recording function, it may allow you to identify a person who was tempted to press the bell to check if someone is at home.

The brain of the installation is the headquarters - here the signals from the detectors and control devices.She launches the mermaid and sends a signal to the owner or security agency.More extensive can manage various home automation functions (i.e. an intelligent home).Depending on your needs, equipment is selected to build a wired, wireless or hybrid connection.

Manipulators and remote controls are used to communicate with the headquarters and system management.The manipulator can be an ordinary, analog keyboard, or a modern device with a touch screen, showing the condition of each of the detectors, image from cameras, etc..Alarm installation, using a special application, can be managed online, e.g..using a smartphone.

The detectors are the eyes and ears of the system.The simplest, magnetic signal the opening of the doors or windows.The alarm starts when the magnet on the wing moved excessively from the reed switch on the frame.Acoustic windshield sensors will arouse it when they "hear" the glass of glass.

In the interiors, PIR infrared detectors are commonly used, called passive ones, which turn on the alarm when the intruder invades into the room.The PIR detector does not recognize the movement, but the temperature change.If the surroundings have several degrees Celsius, and a man appears in the field of view, the device receives it as a heat stain and sends an alarm signal.

In rooms exposed to sudden temperature changes, e.g..In the living room with a fireplace, it is better to plan more precise dual detectors.These are made of two detectors, each of which works on a different principle - most often they are a passive infrared and microwave detector (PIR+MW).The signal to the headquarters is sent when both detection tracks detect an intruder.

Detectors and electronic barriers can also be installed outside the house - on its walls, in the garden or on the fence.The sooner they detect the thief, the less a chance that he will be able to get inside.The most popular infrared detectors - acting like those in interiors, only in more difficult conditions - will see an intruder who, for example.He will approach the window.Infrared barriers, emitting beams invisible to the human eye of infrared rays, are set on the road that the burglar must be overcome by going from the fence to the building.

They differ in range (from a few to several dozen meters), with the headquarters and communicate with each other with a cable or wirelessly.Their power can be battery, so you don't have to lay cables in the garden.Microwave detectors are used much less often (very high frequency electromagnetic waves use to detect motion) and shock sensors mounted on the fence.

If the decision to assemble the system is made at the construction stage, the wires are carried out under the plaster.Later, the alarm can also be installed, however - to avoid forging the walls - more expensive wireless versions are used.

In the so -called.Intelligent house, various installations (alarm, lighting...) and devices (e.g..drive blinds) joins one system.Human equipment programmed work together without his participation.

The basic, anti -burglary functions of the intelligent house include the simulation of presence.The system, in order to confuse potential burglars, takes care of the impression that someone is in the building.In an irregular way in various rooms turns light (even a TV!), On a cloudy day lights lamps in the garden, leaves external blinds at night.This function requires careful planning and possession of installations that can be integrated (alarm, automatic blinds, automatically controlled lighting).

The system of an intelligent home enables e.g..synchronization of lowering roller blinds with an alarm attachment or voice management of all installations.It is enough to terminate the agreed command that the house will turn on the alarm, block the door and leave the blinds.

Approximate costs of securing the house

Prices of anti -burglary doors start around a thousand zlotys, for better we will pay several times as much.Anti -burglary windows in the RC2 class are at least one -third more expensive than without security versions.The blind for a small window is an expense from several hundred zlotys, for a larger 1-2 thousand.zloty.