The bottle in the wheel arch is no coincidence. You should never do that 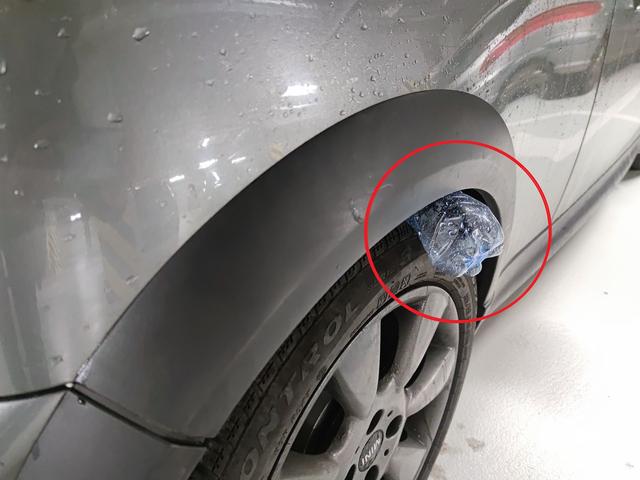 The bottle in the wheel arch is no coincidence. You should never do that

A crowded car park (also underground) in front of a shopping center or supermarket complex is, despite security and monitoring, a perfect place for car thieves. Moreover, in recent years an increase in car theft can be observed, although of course the statistics from the 90s are far from being the case. See what behaviors or situations should make you alert.

This is one of the most popular methods of thieves and mainly concerns relatively new vehicles equipped with a keyless car access system. The criminals, using a small "suitcase", intercept the signal emitted from the key, which is transmitted to a second device located by the car in the hands of a partner.

The car "thinks" that it opens it and fires the original key, so it looks as if a thief is getting into his own car. The method is most often used in the case of cars parked next to houses, where the owners usually put the keys close to the door. Although this does not mean that we are not in danger "in the field".

It is enough that when we leave the car, a thief will walk not far from us with the first device hidden in a backpack or sports bag. Thus, it will intercept the signal and send it to the other person standing by our car. How to protect yourself? We should pay attention to whether someone is walking suspiciously close to us with a bag or backpack, although the crowd does not make it easy. Another way is to invest in additional security features, a special cover jamming the signal or simply wrapping the key with aluminum foil.

This method applies to a larger group of cars. The owner, leaving the car, presses the button that locks the door lock, but a nearby thief with a jammer prevents the remote control signal from reaching our car.

As a result, the vehicle is not locked at all, and the thief can steal things left in the car or start the car in a few moments with additional equipment. How to protect yourself from it? Even if we have a central locking controlled by a remote control, we should personally check if the door is closed after closing.

We stay on the topic of electronic theft methods. The so-called The game boy method is similar to stealing a suitcase, but without intercepting the signal from the original key. The device used in this method comes from Bulgaria and is advertised by manufacturers as a solution for the locksmith industry that helps in the event of lost keys. Of course, they warn against illegal use. The device looks like a pocket game which, similar to a car, and using appropriate software, generates codes from the key (like in the movie) - necessary to get inside and neutralize the alarm.

The above-mentioned equipment works mainly with cars from Japanese and Korean producers. It is difficult to defend yourself against just getting into the car, but if the thief wants to steal the vehicle, we can use additional security measures, e.g. in the form of cutting off the fuel supply, which is controlled by a hidden button. Another thing is that when you see someone in the car park "playing a game", they are probably breaking a security feature.

It consists in inserting a coin between the door and the door handle (usually in the rear passenger door), which is to make the tilted door handle bounce and prevent the door from closing.

However, the thief does not enter the action immediately - he follows us until we park again and want to lock the car. Fortunately, this method is not very effective (as we have tested in the past), especially on new vehicles, but that doesn't mean it never works.

Method for the bottle

The method is to put a plastic bottle in the wheel arch. The thief in hiding is waiting for the owner to return, who - while driving the car - hears a strange and loud noise. Worried, he gets out, usually leaving all his belongings inside, a fired car and an open door.

The thief, taking advantage of the driver's moment of inattention, opens the passenger door and steals a purse, wallet, laptop or other things left there, or jumps into the driver's seat and drives away in the car, often with a complete set of documents or even our mobile phone.

Instead of a bottle, thieves also use a chain or wire. It's mainly about making noise and giving the impression that there is something wrong with the car. If we suspect a breakdown, in such situations we should always turn off the engine and take the keys with us, watching if someone is approaching or spinning around our car.

The method on a piece of paper

Here, the effect is practically the same as for the bottle, but only works if the car is parked facing away from the exit. The method is to place a piece of paper behind the rear wiper of our car. When the driver wants to withdraw, the said card blocks his view. So he gets out to remove it, most often like a bottle, leaving all the stuff inside and not shutting down the engine.

As in the previous case, even if you get out for a moment, you should turn off the engine and watch the surroundings. It is also worth remembering that thieves do not always put the card behind the doormat when we are away - after all, when we pack our purchases, we will notice it and take it out right away. Such a person can "give it" to us when we take our place and start fastening the seat belts. Another easy way is to park in the back, but then it can be more difficult to pack your belongings if you are planning larger purchases.

Another method in which - as in the case of a suitcase - the cooperation of thieves is required is the cullet method. What does it look like? When we leave the place or the alley, there is a minor and harmless cullet arranged by the thieves. They take advantage of the moment of our inattention and when we analyze the potential damage with one of them, the other at this time collects the "stuff" from within.

Here, however, you can also cut into the thieves who will target the whole car. Despite the nerves related to the situation, we should stay cool, not distract us and take the keys with us.

Regardless of where the theft took place, apart from reporting to the police, it is also worth searching the area of ​​the place where we fell victim to the crime on your own. Thieves do not always take their loot straight away, where they take it apart in a few hours - they often hide it first in the garage for a while, or leave it in a local parking lot, or a few blocks away, in a place where it is not noticeable. see if the vehicle is equipped with a GPS locator.

Finally, some tips from the police: