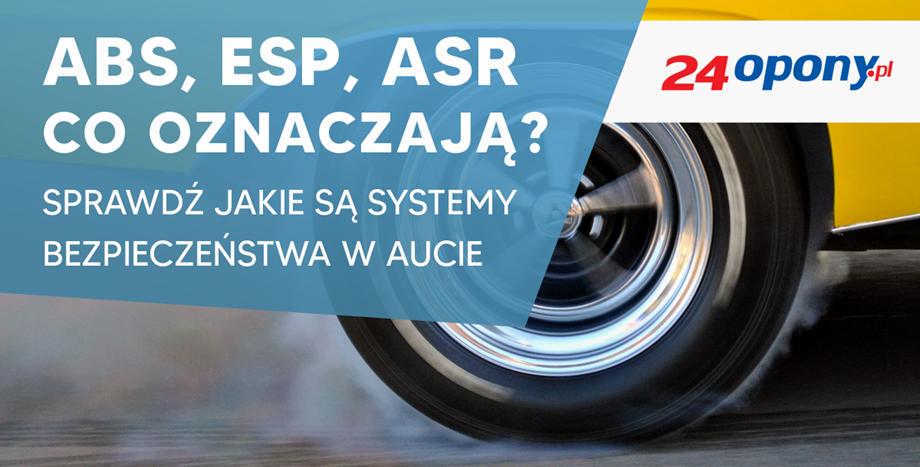 In addition, automotive companies are increasingly giving up the use of unified names of individual systems, describing them in their own way.During our salon tests, we have repeatedly encountered the situation that the seller could not answer the question about e.g..The ESP system, because in the cars he sold, it was called completely differently, e.g..DSC or VSA.

Below is a list of the most popular systems to improve driving safety.Without many of them, it's hard to imagine a modern car, but some are only gadgets with mainly marketing importance.

Principle of action: ABS (from Ang.Anti-Lock Braking System) is a system that prevents wheels to block when braking.The sensors control the turnover.

Availability/costs: From July 2006, all new cars sold in Poland must be mandatory to be equipped with ABS.

Usefulness: Thanks to the ABS during sudden braking, the car remains control, which allows you to avoid obstacles.In today's dense traffic is an indispensable element of car equipment.

Principle of action: ACC (abbreviation Ang.Adaptive Cruise Control) is a cruise control with the automatic speed control system depending on the road situation, which maintains a safe distance from the preceding cars.After setting the speed, the vehicle automatically slows down when inhibiting cars driving in front of us and accelerates if the road is free.

Usefulness: The system will be appreciated by drivers traveling mainly on highways and confidence in on -board electronics.

Principle of action: AFIL (Citroën), Lane Assist (VAG and Honda Groups) warns against exceeding the selected lane.Cameras placed in the front of the car monitor the direction of driving relative to the asphalt -painted lines separating the lanes.In the case of invading it without signaling the direction indicator, the system warns the driver with a sound or light signal (in Citroën, additionally vibrating the driver's seat).

Availability/costs: The system is becoming more and more common.Until recently, he was in the limousine equipment, today it appears in compact cars (as an option).

Usefulness: Lane Assist is a system to protect the driver in the event of falling asleep behind the wheel.Unfortunately, well -marked roads are needed for its proper functioning, which is difficult to find in our country.

Principle of action: Adaptive Forward Lighting (adaptive front lights), they differ from ordinary headlights, that they allow you to light the bends.This function can be carried out in two different ways.In cars with the so -called.static cornering lighting, depending on the position of the steering wheel, in addition to ordinary headlights, additional lights can also turn on (usually also fulfilling the function of fog lights), directed to the side.In the dynamic lighting systems.

Usefulness: Even the simplest static systems are recommendable.Dynamic systems are a considerable expense, but they are much better.

Principle of action: ASR (abbreviation Ang.Acceleration Slip Regulation) counteracts the slip slide to which the drive is transmitted to.If the sensors detect that one wheel begins, for example,.toilet, the system blocks the wheels.In the event of a slip of the entire axis, the electronics reduces the power of the engine by taking gas.

Availability/costs: The system works based on ABS, but also interferes with engine control.ESP performs the functions of this system in new models.

Usefulness: The solution is very helpful during winter and in cars with strong power units.

Principle of action: bass (abbreviation Ang.Brake Assist System) supports the driver during sudden braking.The unit is connected to the sensor measuring the speed of pressing the brake pedal.In the case of a faster than usual reaction, the system increases the pressure in the brake system, thanks to which the full braking force is previously obtained.Sometimes emergency lights are also started or the alloy lights begin to pulsate to warn the drivers.

Availability/costs: The system is increasingly a standard addition to the mandatory ABS system.

Usefulness: Many accidents occur because drivers do not use the capabilities of the braking system of their cars.The bass can really help in this.

BLO (Side Assist) - warning about the vehicle in the "dead field":

Principle of action: close to (Ang.Blind Spot Information System) is a set of cameras mounted in side mirrors and connected to the warning indicator in the so -called.dead field.

Availability/costs: The system was the first to introduce Volvo, today it also appears with other manufacturers.

Usefulness: in our opinion, the system is not worth a large surcharge.

Principle of action: City Safety prevents collision or reduces its consequences to a speed of 30 km/h.If the radars in the vehicle record a quick approach to the car driving in the front, in the absence of the driver's reaction, the car will start the brakes itself.

Availability/costs: System installed in Volvo models and in Passat as an additional paid option.

Usefulness: a solution helpful in urban traffic, but ensures full protection only at speeds not exceeding 15 km/h.

Principle of action: Driver Alert (VW) and Attention Assist (Mercedes) are systems that monitor the way of maintaining the direction of driving and smoothness of the steering wheel movement.Based on the collected data, they detect behaviors testifying to the drivers' drowsiness and warn him about this light and sound signal.

Availability/costs: such solutions, reserved so far for higher class cars (M.in.Mercedes of classes E and S), they already appear in lower segments (e.g..in the new Ford Focus or VW Passat).

Usefulness: a system worth recommending primarily to drivers often traveling in distant routes.

Principle of action: EBD (abbreviation Ang.Electronic Brakeforce Distribution) is a corrector of the braking force chapter.The system automatically optimizes the braking power of individual wheels so that the car maintains the peeled driving track.

Availability/costs: It is an ABS support system, increasingly mounted as standard in new car models.

Usefulness: The system helps to keep the track while braking on the corner.

Principle of action: ESP (abbreviation Ang.Electronic Stability Program) takes care of eliminating car slipping while overcoming arches.When the sensors detect such a phenomenon, the electronic system brakes one or more wheels to maintain the track.In addition, ESP also interferes with engine control, e.g..captures at the right moment of gas.ESP systems have taken over the functions of previously used traction control systems.In addition, electronics controlling the track control system in some models performs the function of Hill Holder - a device preventing uncontrolled rolling of a car from steep driveways.

Availability/costs: ESP is increasingly mounted as standard, and not as an additional paid option.

Usefulness: ESP significantly increases the level of safety.It is useful sporadically, but it can save from many dangerous situations.Even if it requires an additional payment, it should not be resigned.

Availability/costs: Cadillac Deville from 2000 was the first serial car equipped with a night vision system.Later, the group offering such systems joined M.in.Mercedes, BMW, Toyota, Lexus, Audi and Honda.Currently, night vision systems are offered in many higher and middle class models.Prices remain high, e.g..In the BMW 7 Series for the Night Vision system you have to pay extra.10 thousand.zlotyotych.

Usefulness: night vision systems allow you to see an obstacles on an unlit road even 300 meters in front of the car, thus actually improve safety, especially when driving outside the built -up area.

Availability/Costs: TPMS system is a mandatory equipment for Runflat tires, in which the driver would not notice a drop in the tire pressure.It is also offered in many models without Runflat, often as part of standard equipment or for a small extra charge.

Usefulness: monitoring air pressure in wheels avoids many dangerous situations (e.g..loss of control over the car) and premature tire wear.Some systems are known for false alarms, but they can still be recommended.

PRINCIPLE OF OPERATION: TSR (skrót ang.Traffic Sign Recognition) - under this collective name there are systems recognizing road signs and informing the driver about them, e.g..in the form of warnings and messages displayed on the dashboard.Some operate only on the basis of information obtained from a camera mounted on the front of the car, others additionally compare what you can see, with the data contained in the GPS navigation software.

Usefulness: Independent tests show that this type of systems must still be refined.They often mislead the driver, e.g..informing that on a given section you can move at a higher speed than it would result from the markings actually on the road.For now, you can find many other, more sensible ways to spend money.TSR systems are still just gadgets.

Nothing will replace reason!- Even the most advanced safety systems do not release drivers from responsibility for their actions, and even more so from the obligation to maintain vigilance while driving.Unfortunately, many solutions can be excessively lazy leaders.What if the electronics once fails?On the other hand, even experienced drivers should not say that they do not need ABS or ESP.In increasingly denser traffic, any help can be useful.